Danielle “DeeDee” Woche, a 2013 Vandegrift High School graduate, decided to take a gap year to see the world, have adventure and serve others before attending the theatre program at American University in Washington, D.C.

Rather than try to make her own arrangements, Woche chose the semester-long South Pacific Service and Ocean Skills program offered by Rustic Pathways. She chose this route in part because of her passion for the water. The land-locked Austin-ite wistfully explained that, “I love the ocean and the whole idea of being a surf bum.”

What better place to start her semester than in Fiji, where she and her Rustic Pathways brethren inaugurated their adventure by living on the beach. At first, the group of 16 spent their days in a nearby village helping rebuild it after a recent storm. They had lunch daily with the village chief and familiarized themselves with the local culture. 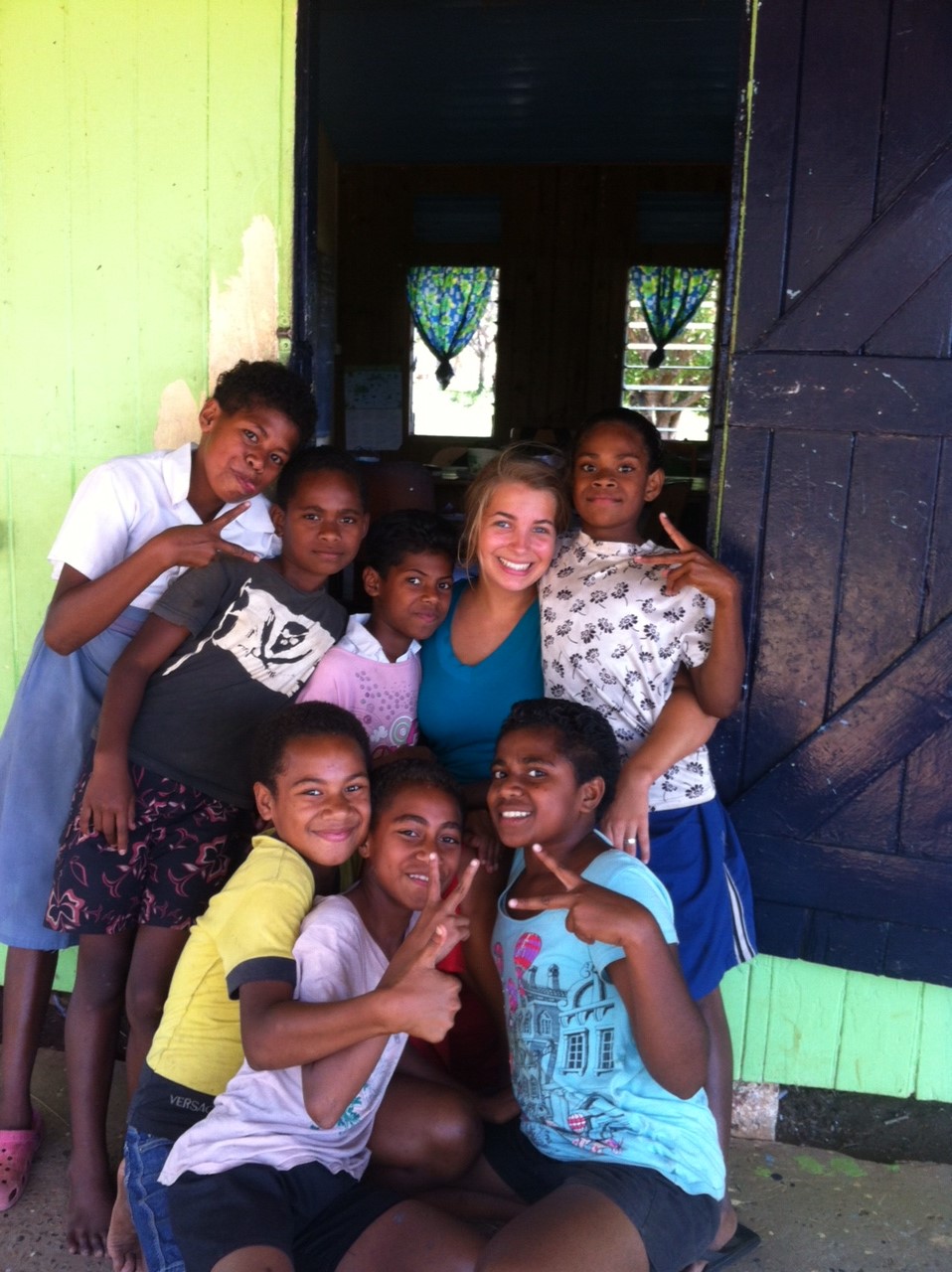 DeeDee Woche surrounded by local children in the highlands of Fiji.

As is typical for many traveling overseas, Woche and several others in her group got sick their first week in Fiji. No one required anything more than antibiotics, and they all soon recovered their health and strength.

From the beach they headed to the highlands of Fiji. Once in the mountains, they split into smaller groups and Woche, along with two other girls, lived with a local family. She emphasized that they were lucky to stay in a house with a permanent roof and separate kitchen.

Woche and her companions also had their own room, where they slept on thin mattresses on the floor. The home had no running water, however, and everyone in the household got their water from a filtration pump. As a health precaution, Rustic Pathways students ate with their group instead of their host families, though they did join them for daily tea.

Despite the strange and new surroundings, Woche most remembers the joy and kindness of the people of Fiji.

“So many great things (to remember). The smell of flowers. One day I asked a girl who worked with us about the flowers and she brought me a huge bouquet and kissed me on the cheek.” Woche was especially effusive about nights spent listening to locals play ukuleles and sing while drinking Kava, made from a root of the same name, which she laughingly described as “disgusting.”

Five weeks in Fiji was followed by three in New Zealand. And whereas Fiji was about service, New Zealand kicked up the adventure factor. Surfing, skydiving, bungee jumping, xorbing (“extreme orbing,” rolling down a hill inside a bouncy plastic sphere), blackwater rafting (exploring caves in rafts and tubes) and climbing a waterfall — all are activities Woche enjoyed during her short stay in New Zealand. She even got to visit the set of the Hobbit village from “Lord of the Rings.”

New Zealand most impressed Woche with its beauty.

Australia was the group’s final stop, and a trip to Australia would not be complete without a dive on the Great Barrier Reef. Woche had never dived before but embraced it along with the many challenges the trip had to offer.

Though her official gap semester with Rustic Pathways ended after three months, Woche decided to take advantage of the location and stayed on in Australia, working as an au pair for family friends. Her education has not stopped, though, and the job has taught Woche a new skill. “I’ve learned how to be alone.”

She also gained a new appreciation for the little things, like showering and privacy. As she described, “When I was really weak and vulnerable in Fiji, I learned by looking at the Fijians. This is their life all the time and they’re the happiest people I’ve met.”

Woche encourages others to travel and to take advantage of programs like Rustic Pathways. She realizes too that travel is expensive. She reminds students that working as an au pair provides an economical means to travel and experience life in another country and culture.