At the April 9 meeting, parents seemed to express more confusion than concern, something shared by the counselors present.

“We have been fielding a lot of phone calls and emails about the change. And I have to assure you that when the counselors heard about this, our anxiety levels rose too,” said VHS counselor Carolyn Brooks. “We’re figuring it out. We’re taking it one step at a time.” The intention of lawmakers was to reduce graduation requirements for students who may wish to pursue a vocational path after high school instead of attending college. In doing so they reduced the required number of end-of-course exams from 15 to five as well as eliminating the requirement that those exam grades count as 15 percent of a student’s grade.

Leander Independent School District, however, has no intention of lowering their expectations for students. Their response to the new law has been to create their own custom plan, offering a more rigorous fourth path to graduation in addition to the three defined by the state.

Another change for LISD in response to the law will be to now have one class for incoming students that combines ACE (a college-preparedness class) with health and the newly state-mandated Professional Communications (currently Communications Applications).

Part of the new law requires students to select, in their freshman year, one or more of what the state has termed ‘Endorsements’. There are five Endorsements, which can be thought of sort of like majors: STEM (Science, Technology, Engineering and Math), Business and Industry, Public Service, Arts and Humanities, and Multidisciplinary.

“Endorsements are earned by successfully completing some courses that fall under what LISD has always called Programs of Study… The state is just changing some of the terminology,” Brooks explained. But Endorsements are designed to have a less narrow focus than Courses of Study.

Counselors have been visiting with Four Points 8th graders and encouraging them to choose the Multidisciplinary Endorsement, at least initially, as a means of keep their options wide open as they enter high school.

Amy Rodriguez, another VHS counselor who spoke at the meeting, also said that, despite the availability of four graduation tracks, “We are starting out everyone on our LISD Distinguished with Honors program.”

She explained that, “We believe that in equipping them with this program and getting them to start on this path that they will have the most doors open to them.”

Furthermore, the new law allows schools to accept two years of Computer Science courses as a substitute for current World Language requirements. LISD will not do so.

Brooks stated that this is because LISD only offers Computer Science I and Computer Science Pre-AP, which are more hands-on and project-based than other districts’ more theoretical computer courses.

And because many colleges will still expect applying students to have a World Language, LISD felt it would place students at a disadvantage to not require a world language.

Brooks was quick to add that the state is, “still talking about other courses they might add. This (new law) is an evolution.” She encouraged parents to look at the course catalog–available online in the next month or so–to begin to figure out which coursework will fulfill their student’s Endorsements and path to graduation.

“It’s really critical as we move through this that you’re paying attention to the courses your students are taking, making really good, solid choices, meeting with your student’s counselor.”

And don’t forget, as Rodriguez emphasized, “We’ll be there for you along the way.”

To view the entire presentation, visit the counseling page at www.vhs.leanderisd.org. 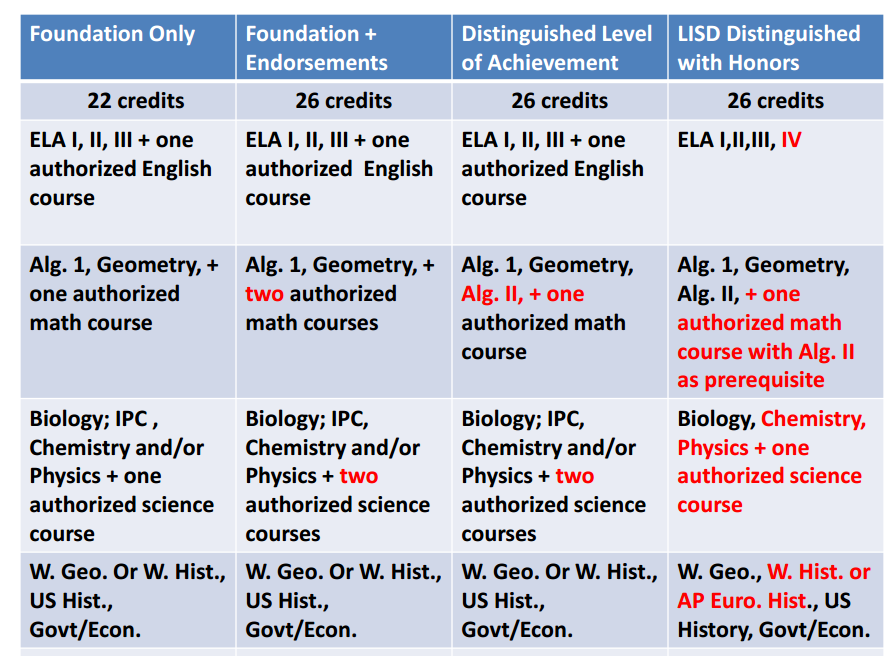 The four paths to graduation. The left three are from HB5, passed by the Texas legislature. The right-hand column is LISD’s custom graduation plan. Differences between each successive path are shown in red.