After months of preparation, the Vandegrift varsity cheer team brought home a silver medal from the UIL state competition. This is the highest the Viper cheer team has ever placed, making it a new record. Viper cheer received 2nd place in the State Coed Division, 1st place in Crowd Leading and 1st place in Fight Song.

“The process was really difficult,” junior Cady Wong said. “We had many long practices where we had to yell during our routine over and over again. But we as a team put in a lot of work especially when it came to encouraging each other and also physically exerting ourselves almost every day since the end of football season.” 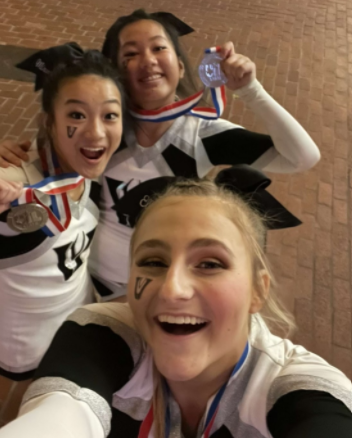 The competition took place in Galveston on January 13 and lasted the entire day.

“I was super excited and nervous to perform,” junior Jenna Kimball said. “The morning of prelims we performed our routine.”

They began the day by getting ready, stretching, and walking through their routine. They then warmed up, had a team pep talk, and finally performed.

“I was ecstatic to see how we placed relative to the other schools, because when it came to our routine we worked on it so long that you get used to it. So when other people see it, it’s a shock to them, and they see the cool elements that we have been working on,” Wong said.

After performing for prelims, they had their finals performance, determining their ranking.

“We had a 3-minute routine which incorporated a band dance, a cheer, and a defense cheer in the fight song,” Kimball said. “Our whole team of 26 did a standing tuck.”

The Viper team placed second in the entire state of Texas, and brought home the silver medal.

“Our trust with each other grew as we all knew by the end we were all giving our 100% each time,” Kimball said. “With so much work we had put into our performance it made getting a medal so much more fulfilling.”

In addition to writing on the VHS newspaper staff, Arabella Villarroel, a junior, loves to dance and is in the Vision Dance Company. She also loves to bake, read,  write and anything and everything Disney!